Hello, I released version G.5 today with a fix for "Ext Clk" mode. After a few months of use, it seems it was the last bug left.

I hope Multi-Trak owners will enjoy the added features of this firmware :) (by the way, I wonder how many of them there are in studios everywhere...).
Posted by GliGli at 2:37 PM No comments:

I started to work on a series of software modifications for the Sequential Circuits MultiTrak, mainly intended to improve usability in "live" or "jam" use.

As for the P600, I wrote an emulator of the digital part, which I used as a tool to code the modifications.

I had a setback: the MC68701 keyer from my Multi-Trak stopped working at some point, but I finally managed to read the contents of the chip and I was thus able to rescue it by reprogramming a new one :)
For those might have the same issue, here is the binary: mtrak_keyer_dump_MC68701S.bin
It can be programmed in an MC68701S or MC68701L but, beware, NOT in an MC68701U4L or an MC68701U4S.

Then, I finished the modifications of the main firmware, and managed to cram in the 3 that I wanted to do and everything seems to work well. I started from official version 2.2, which is the most recent and the most compatible. A version 3.0 exists but it is incompatible because the hardware is different, and therefore this modification will not work on it.
For technical reasons, these settings are not saved: there was about 50 bytes of free space in ROM, I already had to use many coder tricks to get everything in there!

I named the version "G.3", and it can be displayed as usual with: "MIDI Channel + MIDI Mode".

Here are the binaries:
And finally the project page on GitHub: https://github.com/gligli/mtrakemu

A while ago, I made this cable to drive my Yamaha CS-10 CV Trigger using my Arturia BeatStep Pro.
It's a bit unusually made and takes advantage of the way the Yamaha CS line of synths do "Trigger out" but it's easy to make and works just fine! 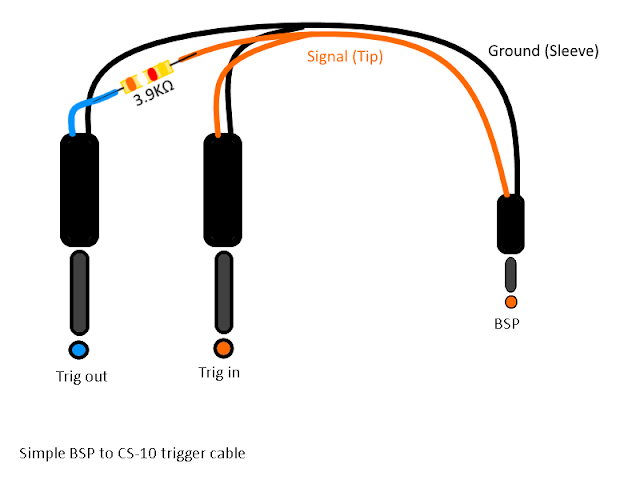 NB: I recently found something nice about this cable: it can also be used to loop the CS-10 audio out back into the filter. Just plug the blue 1/4 inch jack into "external input", the orange one into "output" and the BSP end into your mixer, set "Ext" mode and tweak the corresponding potentiometer to taste :)
Posted by GliGli at 4:38 PM 13 comments:

I made several improvements to Overcycler2 since my last posts:


I also made a video demonstrating some of the user interface of Overcycler2 and then played some new patches:

Posted by GliGli at 6:27 PM No comments:

By the way, I made several changes since the patches demo:

Here's a demo of a few patches on Overcycler2, showing some of its sound palette.
They tend to have lots of overdrive to get an idea of the raw synth sound but by adjusting the pre-filter mixer levels, it's perfectly possible to get tamer sounds.


By the way, I recently started implementing oscillator sync, I didn't demo it yet because I think I can improve the way it sounds (there's a bit of aliasing on the upper range right now).
Posted by GliGli at 11:19 AM 2 comments:

I finally received my PCB!

Unfortunately I found 2 bugs on the board revision I sent for production but it was too late, so there are a few small straps on it.

Anyway, I soldered all the components, did a bit of debugging and it finally worked, all 6 voices!
It works quite fine actually, better than on breadboard. Eg. the potentiometers ADC captured lots of noise while on breadboard which made adjusting values hard. Here the noise usually doesn't exceed 1 bit.
Overall much less noise on the PCB, which make the VCAs really quiet when closed.


Pic of the board (sorry, cellphone quality): 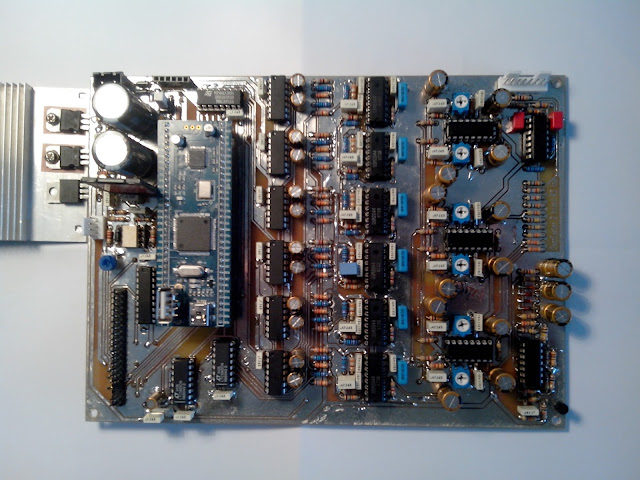 (The heatsink is temporary, I will use the case itself as a heatsink.)

Now I just need mount the board inside the case, solder the connectors (I have yet to receive them) and the synth will be done :)
Posted by GliGli at 1:00 PM No comments: